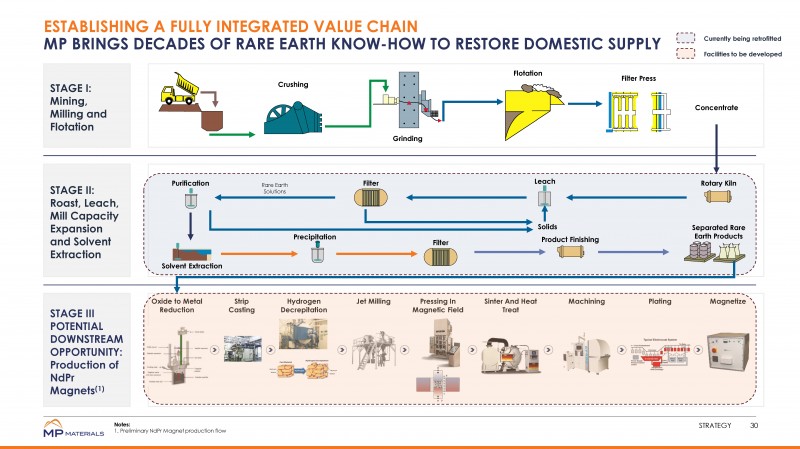 Over the last few months there have been several major announcements regarding the development of alternatives to the Chinese rare earth magnet supply chain for the US market. This follows a series of executive announcements by the Trump administration, the US Department of Defense (DoD) e.g. John S. McCain National Defense Authorization Act, and even major commercial companies actively seeking non-Chinese sources for their magnet requirements.

Some of these major initiatives are listed below:

In July this year, MP Materials, a producer of rare earth raw materials, announced they were to list on the NYSE through a merger with Fortress Value Acquisition Corp. MP Materials is the owner and operator of the Mountain Pass mine in California, the only commercial-scale rare earth mining and processing site in North America. In 2017, MP Mine Operations LLC won a bid to acquire the assets of Mountain Pass following the 2015 bankruptcy of the previous owner and operator, Molycorp. MP Mine Operations LLC is a US-led consortium, with Chinese rare earth miner Leshan Shenghe Rare Earth Co. holding a non-voting minority interest.

MP Materials plans to raise $500 million to fund an integrated mine to magnet strategy. They describe a multi-year phased development strategy with separation through metal production to rare earth magnet production. Currently, they are mining and concentrating the rare earth elements (REE) containing mineral which is shipped to China for further processing. MP Materials claim they are supplying about 15% of the global REE demand.

In December 2019, USA Rare Earth LLC announced the opening of a pilot plant facility in Wheat Ridge, Colorado for the purpose of fully separating and purifying rare earth and other critical minerals. The feedstock will be leachate from the mineral deposit at the Round Top mine, located just outside El Paso, Texas. This was followed by an announcement during April 2020 that USA Rare Earth LLC has purchased the neodymium iron boron (NdFeB) permanent magnet manufacturing equipment formerly owned and operated in North Carolina by Hitachi Metals America, Ltd.

It should be noted that the REE concentrations in the Round Top source are extremely low, e.g. Nd is at 28 ppm and Pr at 10 ppm. So, there is a question if this is truly a viable economical source of LREEs. Additionally, the HML equipment acquired is not a complete line and missing key processing elements plus is bespoke to Hitachi’s special Hitachi Low Oxygen Process (HiLOP technology). The status of the equipment installation is unknown at this time.

In July, 2020, the DoD announced a $28.8 Million Defense Production Act Title III Agreement with Urban Mining Company with the goal “to strengthen the domestic rare earth materials industrial base.” No details of the agreement have been made available, but this is a major boast to UMC, which is reported to have a capitalization of around $50 million. UMC claims to derive > 95% of the elements required for manufacture of NdFeB magnets from recycled source material. The latest indication of startup of operations by UMC is “late 2020/early 2021”. Once operational, UMC will be the only commercial US producer of NdFeB magnets and the first in over 20 years.

In July this year, Australian rare earth producer Lynas and US producer MP Materials signed contracts with the DoD to carry out design and engineering work for two US heavy rare earth (HREE) separation plants. The conclusion of the contracts was delayed by several months due to political wrangling in the US, but the DoD project now appears to be back on track.

The size of the award for phase one design work is estimated to be in the range of $1 million-$5 million. The US at present has no commercial capacity to separate rare earths or large-scale commercial capacity to manufacture NdFeB magnets (see UMC above), which are critical to defense, automotive, electronics and manufacturing. Note both primary sources of Lynas and MP are low HREE mineral deposits.

In August 2020, the DoE announced $33 million in funding for 17 projects as part of the Advanced Research Projects Agency-Energy’s (ARPA-E) Aviation-class Synergistically Cooled Electric-motors with integrated Drives (ASCEND) and Range Extenders for Electric Aviation with Low Carbon and High Efficiency (REEACH) programs. One of the awards was made to Advanced Magnet Lab (AML) seeking to develop high-power density permanent magnet motors. When coupled to an integrated SiC drive, these motors will enable an overall specific power beyond 12 kW/kg.

Also in August 2020, the U.S. Department of Energy (DoE) announced $20 million for basic research aimed at ensuring a stable U.S. supply of rare earth elements, which are critical for a wide range of technologies and essential to the energy, economy, and national security of the United States. The research will focus on improving the efficiency of both the use of the elements and their extraction from geological and recycled sources. It will also seek to reduce the reliance on rare earth elements by discovering substitute materials with similar or even enhanced properties.

While not discovered in the US, this recent announcement has caused some interest in the magnet industry.

In August this year, the National Institute for Materials Science (NIMS) and Tohoku Gakuin University in Japan announced they had developed a boron-doped anisotropic Sm(Fe0.8Co0.2)12 thin film containing only a small amount of rare earth elements. The compound exhibited 1.2 tesla (12 kOe) coercivity, sufficient for use in automotive electric motors. In addition, the reversible temperature coefficient of Hc is an improvement over NdFeB. They claim the material could rival NdFeB magnets in terms of magnetic and thermal performance.

This discovery has a couple of major issues. The first and most concerning is it is difficult to see how you scale up a sputtering process of 100 nm films to the 1000s of tons needed for an economical commercial operation (note the global production of NdFeB this year is estimated to be 190,000 tons). Second, the only mass use of Sm2O3 today is SmCo magnet production and today, supply exceeds demand and therefore prices are low. If this becomes a mass market material (breakthrough) then Sm prices will increase. So, are we just replacing a Nd/Pr/Dy/Tb supply issue with a Sm supply issue? Interesting, but a long way from prime time.

The impact of COVID on the US manufacturing industry in general and the magnet industry has not been as dramatic as one might have anticipated through the 2nd and 3rd quarters of 2020. However, uncertainty remains depending on the severity of the fall and winter season impact of COVID-19 and the seasonal flu. Add into the mix a presidential election and the business environment in the next 6 months is impossible to predict with any certainty. However, businesses have rapidly developed protocols and safety measures to minimize infections and maintain production capabilities. The demand-side has been a mixed bag. As one example, automotive production essentially shut down for several weeks, impacting existing platform builds and pushing back new product launches and programs. However, low interest rates have tempted buyers back to dealers’ lots. On the other hand, several businesses benefited from COVID-related medical equipment orders, and home sales along with residential construction have been remarkably resilient in many parts of the country. The biggest negative impact has been on the food service and entertainment segment of the economy, which, while important from an employment perspective, does not directly drive a significant demand for magnetic products.