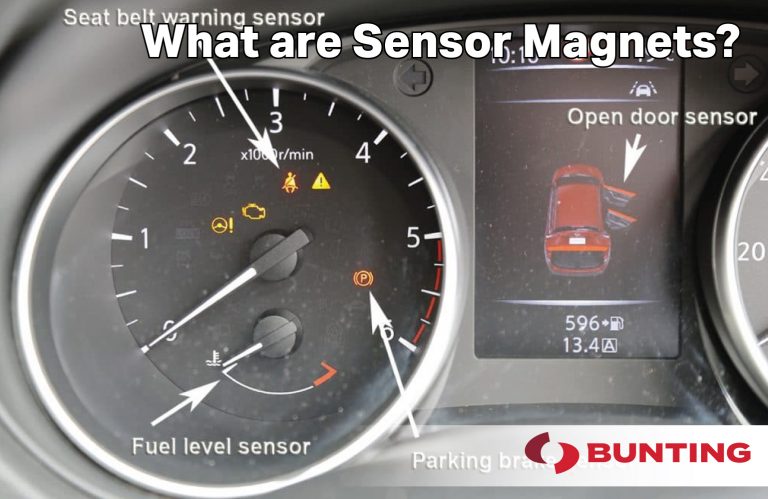 You can find sensors being used everywhere, from the phone in your hands to the car you drive to get to work. Vehicle engine management systems and smartphones using a sensor to determine if a flip accessory is closed may seem like two very different applications, but both rely on sensors to function. There are many different kinds of sensors that support us in our modern, everyday lives, and the operation of these sensors often depends on magnetism. As technology and products continue to evolve, the range and specification of sensor magnets evolves as well.

A magnet sensor converts magnetic or magnetically encoded information into electrical signals that can then be processed by electronic circuits. For example, the sensors in this device are able to identify position, velocity, and directional movement.

Many magnetic sensors work on the basis of one of two principles: the Hall Effect or the Reed Switch.

The application of a sensor determines the optimum design of a sensor, as well as the type or design of magnet or magnetic assembly used in that sensor.

Technical information on sensor magnets can be found here.

Hall Effect Sensors are used for applications such as positioning, proximity sensing, current sensing, and speed detection applications. Hall Effect sensors are able to measure the magnitude of a magnetic field, and are activated by an external magnetic field. When Hall Effect sensors are activated, the magnetic flux density around a sensor exceeds a pre-set limit, where it is then detected by a sensor. The output voltage generated by this effect is called the Hall Voltage. Edwin Hall discovered this effect in 1879.

Sensors that use the Hall Effect are highly robust, and are reliable in extreme environments due to their ability to resist dust, mud, and water. These characteristics make Hall Effect sensors well-suited to positional sensing applications, and are preferential to optical or electro-mechanical designs.

Some examples of sensors designed around the Hall Effect include:

A Reed Switch sensor’s switching mechanism is comprised of two ferromagnetic blades that are separated by only a few microns. The two blades will attract towards each other when a magnet approaches these blades. Once the blades are touching, they close the normally open (NO) contacts, which allows electricity to flow. In some cases, reed switches contain a non-ferromagnetic contact, which forms a normally closed (NC) output. An approaching magnet will disconnect the contact and pull away from the switching contact.

The Reed Switch was invented by Walter B. Ellwood in 1936 at the Bell Telephone Laboratories.

Reed Switch sensors boast incredible reliability for a mechanical switch, and have the ability to function for billions of cycles before failing. The sealed construction of such switches makes them suitable for use in explosive environments.

Some examples of sensors that use Reed Switch technology include speed sensors on bicycles, as well as door and window sensors found in burglar alarms.

There are several different types of magnet material that can be used in sensors. Alnico material is popular due to its excellent resistance to corrosion and heat (resisting temperatures of up to 500° C). Samarium Cobalt magnets are another popular choice of magnetic material, due to their high magnetic performance—especially at temperatures between 150 and 180° C.

Bunting’s team of engineers works closely with sensor manufacturers, as well as end-users in industries such as the automotive and white-goods industries. By working with our industry partners, Bunting is able to optimize the magnet or magnetic assembly design for any given sensor. Such optimization can include developing magnet setters and magnetizing fixtures in order to maximize the magnetic properties. For more information about sensor magnets, please Contact Bunting to speak to a sales representative.